There are multiple motivational stories we all are familiar with, but there are some which despite being little-known can touch the deepest part of our soul. The story of hockey player Sandeep Singh – which might be new to many – will encourage you to keep going when faced with never-ending formidable obstacles. It is an incredible story of an equally incredible individual who came into hard times, but was firm about making a different set of choices in his life. It is a story about a hockey legend who rather than losing hope and giving up, decided to pick himself up, brush himself off, and continue moving with the hope to achieve his goals. However, it is sad that the cinematic treatment of Singh’s story – which is both captivating and impactful – comes across Within the first 10 minutes of the film, we know that Singh (Diljit Dosanjh) was originally never serious about hockey. With the help of an absolutely detestable coach Kartar Singh (Danish Hussain), he never feels the need to build interest for the sport. Often lectured for not being as resolute as his elder brother Bikram (Angad Bedi), Singh decides to represent India because of Bikram’s inability to qualify for the national hockey team and to win the love of his life – hockey player Harpreet (Taapsee Pannu).

For much of the first half, Soorma feels a bit ordinary. It primarily focuses on Singh’s transformation from a carefree lover boy to a stern athlete because he wants to prove his worth to Harpreet and woo her. Even though much of it is real, it is a theme which is similar to what most of us have watched in several Hindi films. Soorma becomes far more lucid and gripping in the second half, when the action moves to Europe and back to the hockey field. By the end, the film is sincerely moving.

Agreed, Soorma makes for a stimulating drama with a complete focus on all key elements – the ecstasy of victory, the anguish of defeat, conquest over adversity and comfort in the face of tragedy, but it is propelled primarily by Diljit Dosanjh’s sincere performance. Diljit is convincing in putting forth the anguish and pain of Singh after he was injured by a gunshot fired accidentally in 2006. He conveys his character’s emotions often without saying a word. The sequence wherein he hits himself after realising his inability to live an independent life show his incredible ability to capture a sportsperson that the public only thought they knew. While Taapsee exudes an impressive confidence and vulnerability, it is disappointing that the director preferred to focus more on her as Singh’s muse rather than a proficient hockey player. The supporting performances are praiseworthy, particularly Bedi as the supportive brother, Satish Kaushik as the concerned father and Vijay Raaz as the high-spirited coach.

Considering the fact that Singh – an Arjuna awardee – created a world record for the drag flick, led the Indian national hockey team, and have 2012 Summer Olympics to his credit, the hockey matches shot for Soorma lack the power of international games. Since most of the viewers have watched Chak De! India and are aware of its impact, you are bound to miss the frenzy.

Soorma has good intentions but not sufficient emotional heft. 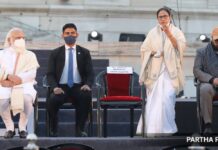 A must see super-romantic selfie of Anushka-Virat

From Petty, Small to Shameless; Feisty Kangana Has More...