It is said, “What Ganga is to India, Mahanadi is to Odisha.”

The tribunal on Saturday heard an interim petition of Odisha Government and asked both the parties to hold another round of talks to find out an amicable solution to the water dispute.

“Today the tribunal was apprised about the three previous meetings held between both the States. The court felt that more discussions should be held to arrive at an amicable settlement. Apart from this, it asked the Odisha government to explore the possibility of spot visits. But a decision on this will be taken after a discussion,” said Surya Mishra, Advocate General, Odisha.

The next date for the hearing of the case is May 11.

Earlier on March 9, the tribunal had directed both the State Governments to resolve the water sharing dispute amicably deferring its verdict to March 30.

A three-member bench of the tribunal had directed advocate generals of both the States to resolve the issue and submit a report in two weeks. 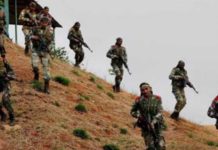 2 Maoists, A Woman Killed In An Encounter In...