The eagle-eye again captured something! Twitter thinks it has proof of Prime Minister Narendra Modi reading out from a script in his latest interview “unscripted” interview.

Amid the ongoing national elections, the interview was broadcasted on Saturday.

The tweets suggest that the Prime Minister was caught in a camera close-up that appeared to show him referring to a scripted question-and-answer (Q&A) sheet.

At the end of the interview with television channel, the Prime Minister is asked about his poetry and whether he has written any latest poem in the middle of the “busy election season”. In response, he asks for his personal files and extracts a couple of papers in order to read out some poems.

As he looks through the papers, the camera zooms in to show what appears to be a Q&A sheet that matches, word for word, the question asked by one of the two journalists conducting the interview. 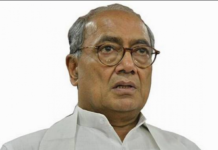