An administration official’s attempt to teach a lesson about mask use in Indore, Madhya Pradesh, has absolutely failed. Cellphone footage from the scene revealed that the officer had made a big deal out of it, gathering not just 20 or so wrongdoers, but also drummers, a cop, and a slew of other locals.

They were ordered to walk down a market street with a crouching gait, which was once used as a punishment for boys in village schools.

When the drummers began to play a melody and the procession moved on, it became apparent that no one, including the officer, had considered the need to preserve social distance.

When they passed, the young men crouched next to each other. The officer kicked the person who failed to crouch and instead jigged to the music.

No one mentioned the importance of avoiding corporal punishment; onlookers seemed to be having a good time. One even followed the odd procession with his cellphone to film it.

No one mentioned the importance of wearing an N-95 mask or even a double surgical mask, as doctors have recommended in light of the mutated coronavirus strains.

The majority of the men wore fabric masks, with a few wrapping a folded handkerchief over their faces casually.

The official has been reprimanded by the district officials, according to the news agency Press Trust of India. Manish Singh, the Indore district collector, said the behaviour was “totally inappropriate… I have scolded him.”

People who disregard standards in place under the Epidemic Diseases Act as a result of the pandemic, he added, are inviting retaliation.

The only way to sever the transmission chain, according to Chief Minister Shivraj Singh Chouhan, is to avoid Covid where it is. “My village-Corona-free village”, “My locality-Corona-free locality” and “My city-Corona-free city” programmes should be made successful. Bhopal’s current curfew has been extended until May 10. 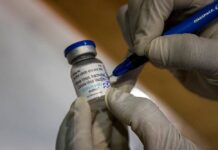 MP: Truck with over 2 Lakh vaccine found abandoned on the roadside 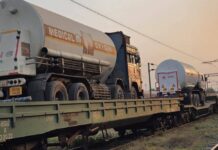 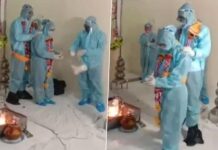 “It Was A Political Operation,” Says Praveen Kakkar On...