Interestingly, 500 robots will draw Ramayan period scenes on Ayodhya’s horizon during the Deepotsav festivities that the Yogi Adityanath government will arrange in the traveler town in November.

The Deepotsav on the Diwali eve on November 3 will be the highlight of the six-day festivities beginning on November 1 in Ayodhya. Aside from the robots, different attractions will be 3-D holographic show, 3-D projection planning and laser show at the great Ram Ki Paidi on the banks of the Saryu River.

Mukesh Meshram, head secretary, Tourism, was in Ayodhya on Thursday to audit arrangements for Deepotsav.

The Ayodhya organization has set an objective of lighting at least 7.5 lakh diyas (earthen lights) across Ayodhya. The majority of them will be lit at Ram Ki Paidi, the scene of the headliner.

“Considering a room for give and take, we have chosen to light around 9 lakh diyas so that under any conditions 7.5 diyas are enlightened,” said an authority of the Ayodhya organization.

A group from the Guinness Book of World Records will be in Ayodhya to pass judgment on the occasion. Around 12,000 volunteers, for the most part understudies of Ram Manohar Lohia Awadh University, Ayodhya, have been locked in for making the lighting of the diyas effective.

The Yogi Adityanath government has been observing Deepotsav in Ayodhya consistently just before Diwali beginning around 2017. This Deepotsav will be the final remaining one preceding the Uttar Pradesh get together decisions due right on time one year from now. 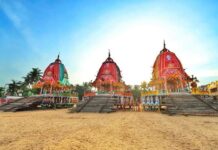 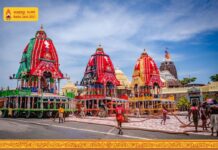 Lord Jagannath with his siblings on Grand Road; On his way to his birthplace