Suresh Raina has taken to Twitter to encourage everybody as the Indian Premier League (IPL) 2021 season has been postponed indefinitely due to the catastrophic coronavirus pandemic. Raina, who was a member of the Chennai Super Kings (CSK) squad for the IPL 2021, had to withdraw from the tournament last year when it was held in the United Arab Emirates due to personal reasons. Raina praised everyone for their battle against the virus on Twitter.

“This isn’t a joke anymore! So many lives at stake & never felt so helpless in life. No matter how much we want to help, but we are literally running out of resources. Every single person of this country deserves a salute right for standing by each other to save lives! #WeCandoit”, he wrote.

India is now fighting the pandemic’s second wave and is one of the worst-affected nations. On Tuesday, India’s gross COVID-19 cases surpassed 2 million, with over 3.57 lakh new infections. The virus has claimed the lives of 3,449 more people, bringing the total number of people killed to 2,22,408.

Due to high surge in COVID-19 cases in India, IPL 2021, which started on April 9, has received a lot of criticism in the last few weeks. The virus struck the tournament as well, with several positive cases.

Also, CSK had positive cases on Monday, with Lakshmipathy Balaji and support staff testing positive. The franchise had another positive result on Tuesday, with Mike Hussey falling victim to the virus.

BCCI had no choice but to postpone the 14th edition of the Indian Premier League (IPL) on Tuesday due to the second wave of COVID-19 sweeping India. However, the board wants to end the league before the T20 World Cup in September, continue reading… https://www.dishanews.com/sports/bcci-may-look-for-september-window-to-resume-ipl-says-official/ 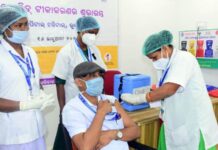 Doctors in Chandigarh observe a “Black Day” to protest...

Kailash Vijayvargiya claims that the Covid 2nd wave only...