In Baghpat, Uttar Pradesh, a mother strangled her two innocent children to death. The perpetrator-mother waited in the bed with her children’s bodies all night. The mother herself told the people as the day continued. Though detaining the alleged woman, police have taken the bodies of the children for post-mortem examination.

Gulab Qureshi, a resident of Chhaprauli city, sells clothes as a hawker. He was on his way to the ferry. His wife Anjum was at home alone with their five-year-old son Umer and three-year-old daughter Anshika during this period. Anjum strangled Umer and Anshika to death late Wednesday. She closed the door from the inside and sat by the bodies of the children all night.

she admitted her crime

There was a commotion on Thursday morning. Anjum screamed and said that she murdered her children. People nearby found that the door was locked from the inside and Anjum was weeping.   When the cops came and smashed down the lock, they saw Anjum was crying in the corner of the room and two children were dead on the bed.

A noose was wrapped around the children’s neck. Anjum was apprehended by police, and the bodies were sent for autopsies. According to CO Alok Singh, the woman is being interrogated for custody. The cause of the incident is still unknown.

This is a developing story… 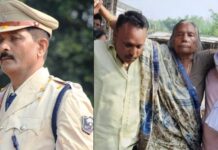